In 1985 he joined his family business as Manager, Procurement & Merchandising at Fortinos Supermarkets Ltd. Carmen held several positions with increasing responsibility during his tenure. Additionally he held various senior roles at Loblaw when Fortinos was acquired, including EVP Zehrs Markets, SVP Supply Chain and Logistics Ontario East. He completed his time at Loblaw as Executive Vice President, Ontario Region.

In 2007, Carmen moved to the Health and Wellness sector and spent seven years in leadership roles, including his role as President of Atrium Innovations, North America. Carmen was not planning to return to the food industry until a fateful, four-hour meeting with Eric La Flèche, President and CEO, METRO Inc., changed his mind. The two found common ground and shared similar values and passion for the customer.

In September 2014, Carmen went back to his grocer roots and joined METRO Inc. as Senior Vice President and Metro Ontario Division Head, where he is now leading a team of over 32,000 people and overseeing the day-to-day operations of Metro and Food Basics stores across Ontario. In 2019, he was appointed Executive Vice President, Metro Ontario Division Head and National Supply Chain.

Carmen's professional accomplishments have earned him numerous awards and accolades. A proud first generation Italian-Canadian, Carmen received the Pentola d’Oro award in 2016, presented by the Italian Chamber of Commerce of Ontario. In 2021, he was inducted into the Grocery Business Hall of Fame in the inaugural class. Most recently, in April 2022, Carmen was recognized with a Report on Business Best Executive Award, an annual celebration of 50 exceptional Canadian leaders.

From the early beginnings at the Fortinos family business, Carmen’s pride and joy has always been his family. Carmen and his wife Sue have been happily married for 41 years and have two sons, Jason and Marcus, who have now made them proud grandparents of five grandchildren aged four and under. When he’s not travelling with family or friends, you can find him on the golf course, cycling, or spending time with his grandchildren. 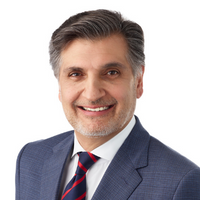